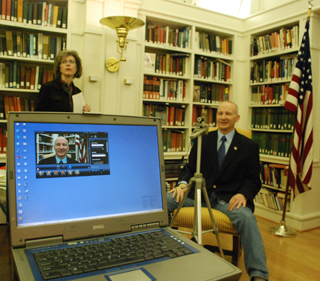 In July of 2010 a friend called and asked me if I wanted to take on an interesting project, one that would challenge the office of the President of the United States.

Who, I asked, was going to head up this project? He briefly explained the facts of Lt. Col. Terry Lakin's case and his decision to disobey a direct order, to force a court-martial. The plan was that the court-martial would allow for a modicum of discovery and investigation that might bring some resolution to the already growing concerns about Barack Obama's constitutional eligibility to be president.

So, after a few phone calls with Paul Jensen and Margaret "Ducky" Hemenway, we began the project. First we built the Safeguard Our Constitution website. This would form the foundation for Terry's communications. A few days later I traveled to Washington, D.C., to meet Terry, Paul, and Ducky for the first time at a private club in downtown Washington.

After a few introductions and light rehearsals, we taped Terry's first statement. Originally, we had intended to produce something very edgy, with shifts and cuts. But once I met Terry and heard him speak the script that we had worked on, it was very clear that we needed to just let him speak directly to the camera. In that first video, Terry stated clearly what he was about to do. Within weeks the video had been viewed by upwards of 300,000 people on YouTube.

Over the next few months the case grew in complexity and frustration. It was clear, early on, that the military courts were simply not going to allow for any discovery. The twists and turns of that experience are the core of the story, so we'll leave it to Terry to fill in those details.

A few weeks before the court-martial and highly probable conviction, Terry and his brother approached me and asked me to serve as the administrative trustee for a family trust that would raise money for Terry's family. It would also fund the communication of Terry's message and help protect him from further actions and perhaps another court-martial.

Why another court-martial? Even though Terry was stripped of his income, benefits, pension, and authority, he was still under the Uniform Code of Military Justice (UCMJ) until discharged. This meant he had to continue under his oath as an officer. An aggressive or ideological JAG could interpret any activity on Terry's part as 'conduct unbecoming an officer' and possibly send him back to jail.

Starting the trust was like starting any other business. We had to open a post office box and set up bookkeeping, bank accounts, and more. We needed a logo, a website, an e-mail address, and social media pages. Shortly after we began the Terry Lakin Action Fund, Terry was convicted and sent to prison.

During the five and a half months Terry was in prison, and subsequently, we received a steady stream of encouraging e-mails and letters. Yes, we had some hate mail and some very abusive phone calls also, but they were few and far between. And yes, Terry, his life, the websites, his mailings, and just about everything else about him (and me a bit as well) have been dissected and dismembered by a couple of the active 'Obot' sites. 'Obots' are devotees who are fixated on Obama without regard to Obama's behavior in the birth certificate area and other areas.

The two websites, two Facebook sites, Twitter site, YouTube account, and various support sites have logged more than a million visitors. The two Facebook sites have more than 3,000 friends between them. Terry has received thousands of e-mail messages. They almost all say the same thing: Thank you for standing up for our Constitution when no one else can or will.

After the release of the purported long-form birth certificate on April 27, 2011, contributions dropped dramatically. The trust then had to drop back to maintaining only basic communications and supporting the Lakins as funds allowed.

This book fell within the scope of my responsibilities. It was my desire that it tell Terry's story well. However, the story is much bigger than Terry's personal experiences, and the country needs to know the principles behind Terry's decision and the broad range and scope of his influence.

To that end we invited several of those who have continued the work to contribute essays covering various related topics. You will find their insights in the second section of the book.

We then engaged an author to interview key people who contributed to Terry's case intellectually or emotionally. You'll find their stories in the third section of the book.

The Constitution was not created by accident. It was not a frivolous effort. Some seem to think a bunch of guys were sitting around a pub one night and said, "Hey, let's start a country." The founding of our country was anything but that.

Our Constitution, Bill of Rights, Declaration of Independence, and other founding documents came out of thousands of years of struggle, death and dialogue, debate and discussion, bravery and boldness. They were the most precise expression of a form of government that finally abandoned the concept of a sovereign monarchy in favor of government by the people, for the people.

The basis of this form of government is the value of the individual endowed with unalienable rights (rights that cannot be revoked under any circumstances). It is on this basis that we formed representative government (not a democracy). We elect individuals to manage our affairs locally, statewide, and nationally, assuming they will manage according to constitutional law, which enabled them to be elected in the first place.

Any elected official or appointee who flagrantly refuses to comply with the Constitution by commission or omission must be called to account.

That is all Terry asked for: simple compliance with the Constitution. As of the date of this prologue neither Obama, nor his staff, nor any of the sitting members of Congress have been willing to do what Terry did.

The Constitution is demanding. It demands that we learn it and protect it.

And what is the reader to take from this work?

Teach your children, teach others, and participate in the work of running this great country.