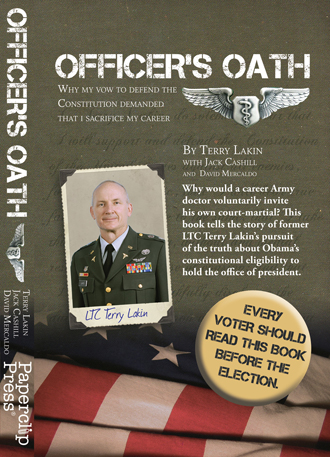 The following letter was sent to Jack Cashill during the writing of the book. We will add additional letters and feedback over the next few weeks.

I have supported Terry Lakin from the beginning, a lot of "damned lies" were passed around by the media regarding duty and responsibility of all members of the armed forces, and with most people completely detached from any experience with service, much of the professional lying has passed for the truth.

It's my personal opinion that Colonel Lakin's C.O. should have been charged with dereliction of duty, rather than the Colonel with missing a movement. I was particularly incensed with the fact the media paints a picture that only those officers of the highest rank and office have a right to question their orders, when the actual oath I took, as a civilian, entering the waiting game for boot camp, and repeated before God with my right hand raised, contains the exact same demand that enlisted personnel fulfill in their own oath, wherein the oath states "I will obey the Orders of The President of the United States, and the Orders of Officers appointed over me, According to the regulations of the Uniform Code of Military Justice".

The officer also states at the end, "I take this oath freely, without any mental reservations or purpose of evasion", however it is the phrase "according to the rules and articles of the Uniform Code of Military Justice" which its self, demands all who are under its jurisdiction determine lawful versus un-lawful orders, with a natural distinction made between those who are entry level, and cannot be expected to fully know and understand the whole of the UCMJ, and those who have entered the level of leadership which the Marine Corps considers to be "Lance Corporal", as it is a non-rated rank, yet it was specifically put in place to provide for the very real need of leadership skill and talent on the level the Corps demands, operating with the four man "fire team" as its smallest establish unit for operational purposes, and such a unit is often with a Lance Corporal, or "acting Corporal", as the senior, and leader of the unit, and making true leadership calls on the actions of his unit while on mission and under enemy fire.

I have long accepted my perspective on this and many similar cases and issues is slanted precisely because the Corps is known among the services as "extremists", not as a pejorative, but as a matter of observation, and as a matter of tactical use by field commanders. At the same time, while one could question just how much authority a Marine Lance Corporal, E-3 could be expected to muster up, in confronting an order appearing to be outside the legal terms of the UCMJ, and truth would only be found by observing the individual Marine, there should be no doubt a Lieutenant Colonel with multiple tours in combat has both the duty to seriously consider his orders, and their provenance, and the background and experience that make the duty to his unit, and in particular, to his subordinates, to whom he is the last word, and expected to be militarily and legally correct.

I still harbor strong feelings about the court martial and incarceration of Private New, of the Army, who challenged his orders to serve under the U.N. in the capacity of "Peace keeper", stating he had no legal obligations to serve under a foreign command, and nothing in the UCMJ supported the commands decision to court martial him for "missing a movement" when he simply stated he could not conscionably serve as a member of the U.N., but would accept any other lawful orders to any other duty.

I fully supported his stance as a young Soldier, serving his Country, while I was a Staff Sergeant, having served in the billet he refused, many times, and never having any comfort or good feelings about what I was doing, or the legal ramifications of any actions I might have to take in that position.

I expect most veterans will buy the book and find it complimenting their own feelings of personal responsibility, as leaders, and many civilians will find what will be in the book, strange, out of what they consider "character" because one almost has to serve under combat conditions to know and fully understand the true impact of the word "orders", and the fact they deal with life and death in an immediate time frame, and are not merely flowing flowery words, emblematic of action, but are real matters of law in the immediacy of the moment, and as such, what is done in that moment is done, cannot be taken back or done over, differently.

I look forward to the release of the book, and anticipate getting a lot of detailed reactions and responses regarding the attitudes of many of the other officers on the side lines, watching the show, and their views on what took place, and what it meant for them. I feel sure it will be another best seller, the issue is cogent, particularly now, and most people with an opinion on it, have little of the facts of such an occurrence.

I note you take special note of the seriousness with which the Colonel took his oath, and I will say that level of seriousness was what I expected from any officer I served under, and while I know almost nothing of the Army and its ways, I would certainly expect a Lieutenant Colonel to have read the oath, the UCMJ, and probably handled discipline procedures under it, and such things make an honorable man delve deep into the "full intent" of what was written, and not allow a cursory perspective and call it "responsible".